UT’s Paraffin Heater Sparks Interest in the US and Canada 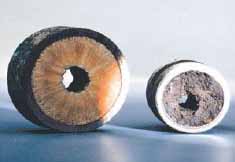 The US currently operates with over 500,000 oil wells. Among these operating wells, it is common for the annulus between the well tubing and the sucker rod to become clogged by paraffin where oil should flow during production. The process to unclog the annulus can cost several hundred to several thousand dollars per well. In the US alone, current costs for addressing paraffin problems are well in excess of $1 billion annually.

Presently, hot oiling, hot watering, or mechanical scraping are the most common ways to remove paraffin from wells. Typically, at the surface, a tank containing oil or water is used to heat, and then pumped down the casing-tubing annulus to remove paraffin build up. Some companies utilize hot oil as often as once per week, which makes for a costly process.

To prevent the paraffin from coming out of the solution, a team at UT is building a tool to integrate the tubing and rod string, which uses induction heating to raise the temperature of the oil above the cloud point. The tool is revolutionary over current methods, since it will save money, time, and provides many advantages.

A test with the tool was conducted at the Electra field near Wichita Falls, Texas, which yielded successful results. Additional testing is currently being coordinated for other wells.

A company in Bastrop, Texas recently reached out with peaked interest, “We found out about the tool by doing an internet search for paraffin-buildup well treatment and were beyond pleasantly surprised to have discovered that your lab - so near to our leases - seems to be on the verge of a major paraffin treatment breakthrough.”

Other companies in Texas, Oklahoma, and Canada have shown a strong interest as well. With the price of oil being down, companies are seeking out ways to lower lease operating expenses. Thus, the paraffin heater tool will provide companies with a way to produce hydrocarbons in a cost-effective and time-efficient manner.