One of the major maintenance headaches causing increased operational cost to the production of mature oil wells is the elimination of wax and paraffin buildup in the drill pipe. Figure 1 shows examples of how the paraffin wax can almost completely block a pipeline. The accumulation over time of non-volatile compounds in "cold spots" in the tubing creates high pressures and flow constrictions that at the very least contributes to accelerated pump wear, and at worst constrict the flow altogether. 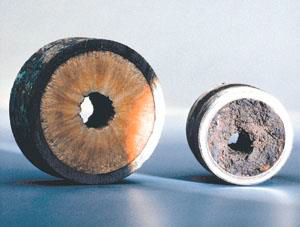 Standard treatment methods include the circulation of hot drilling fluid through the drill string, to effectively melt any buildup spots and circulate out the melted material; or downhole heater elements that require separate power supplies and create added cost in resources and time to deploy.

Inventors at the University of Texas at Austin Center for Petroleum and Geosystems Engineering in the Cockrell School of Engineering (UT-PGE) have developed a design that will generate heat at a localized spot in the production tubing string. Unlike existing solutions, this new technique does not require an external power supply, as heat is generated from the relative motion between a set of magnets and a magnetically conductive surface. The relative motion produces eddy currents that heat the conductor, and the energy input to the unit can be provided by the vertical travel of the sucker rod pump. UT-PGE professors partnered with CEM for assistance in prototype fabrication and testing. Figure 2 below shows the prototype test setup.

It is estimated the power required to hold the paraffin above its cloud point is 13.4 kW which would raise a flow mixture of 50 bbl/day of oil mixed with 50 bbl/day of water 25 C. Research for the concept design was conducted in a series of phases:

Phase 1: Initial focus was given to producing the electromagnetic device, where an aluminum tube is rotated inside a Hallbach array of magnets. Precision torque measurements were taken at different speeds to confirm the 4.23 kW/m of power was produced by the device rotating at an average speed of 600 rpm.

Phase 2: Efforts in this phase were focused on development of the mechanical test fixture that demonstrated that a lead screw could be back driven to produce 62.7 N-m/m of torque required to produce the induction power. The disc brake that was used to supply the torque can be seen in Figure 2.

A full tool prototype is being assembled at this time. This prototype has a two foot active length of magnets and will be installed in the tubing string of an active well to demonstrate proof of principle. Although not currently producing the target power of 13.4 kW, the prototype device will be subjected to all pressures and stresses of the operating environment and temperature measurements will help calibrate heat transfer predictions. 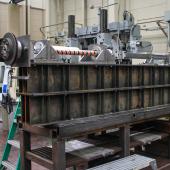 CEM assisted UT-PGE in prototype fabrication and testing of a new technology to clear paraffin wax buildup in a drill string without the need for an external power supply.